On top of a reduced summer teaching schedule we are doing some choice musical appearances in and around Winnipeg. Here is a look at July.
On the 2nd of July the Burton’s Jazz Duo Played at CCFM It is Stella’s Restaurant’s Continuation of the Mardi Jazz (but with more days and more music and without the UoM kids or the bizarre booking practices of the CCFM getting in the way). We are back there on the 15th of August as a trio.

On July 8th we did our uncounted gig at Prairie Ink Restaurant inside a McNally Robinson. We have been playing their stores since we moved here in 2000. That’s a lot of gigs and it says something about their formula! So many venues have come and gone or given into the pressure of the UoM to have untrained kids (and then gone). I buy my music and books there and send potential students there for their ukuleles. I believe in supporting those that support us. That is why I don’t got to Infernos (Chris won’t even have the courtesy to return my emails, except that one time he was desperate) Or Smith (he miss booked us once and has never had us back) it must be weird to hold a grudge for your own mistake.

On July 14th I did a classical/pop guitar wedding at Leo Mol Sculpture Garden inside Assiniboine Park here in Winnipeg. I played a selection of classic pop tunes for the pre-ceremony, while guest and family arrived. For the processional I played Wagner’s Bridal Chorus (better known as “Here Comes the Bride”) for the signing I played “Stand By Me” and the recessional I played Mendelssohn’s “Bridal March”. This ceremony represented the first time, in a VERY long time, where I played either of these classic wedding tunes. It may also be the first time I have played them both at the same ceremony.

On the 15th of July the Burton’s performed at an outside reception that followed a wedding in St. Andrews Manitoba. Yes we do events outside the city of Winnipeg. the weather was fine and the family provided a lovely shelter for the band the featured Robert Burton on Guitar, Adelle Burton on voice and Steve Hamilton on bass.

On the 22nd of July I did my monthly solo guitar gig at the Palm Room inside the 100+ year Old Fort Garry Hotel. Always fun and I am back there on the 5th of August

On the 23rd I played a mix of things at my home church st. benedict’s table

I play a mix of things. I play cajon on some things and guitar on some other. Due to a snafu there was 2 guitars and no bass so I did a lot of bass on my 7 string guitar. 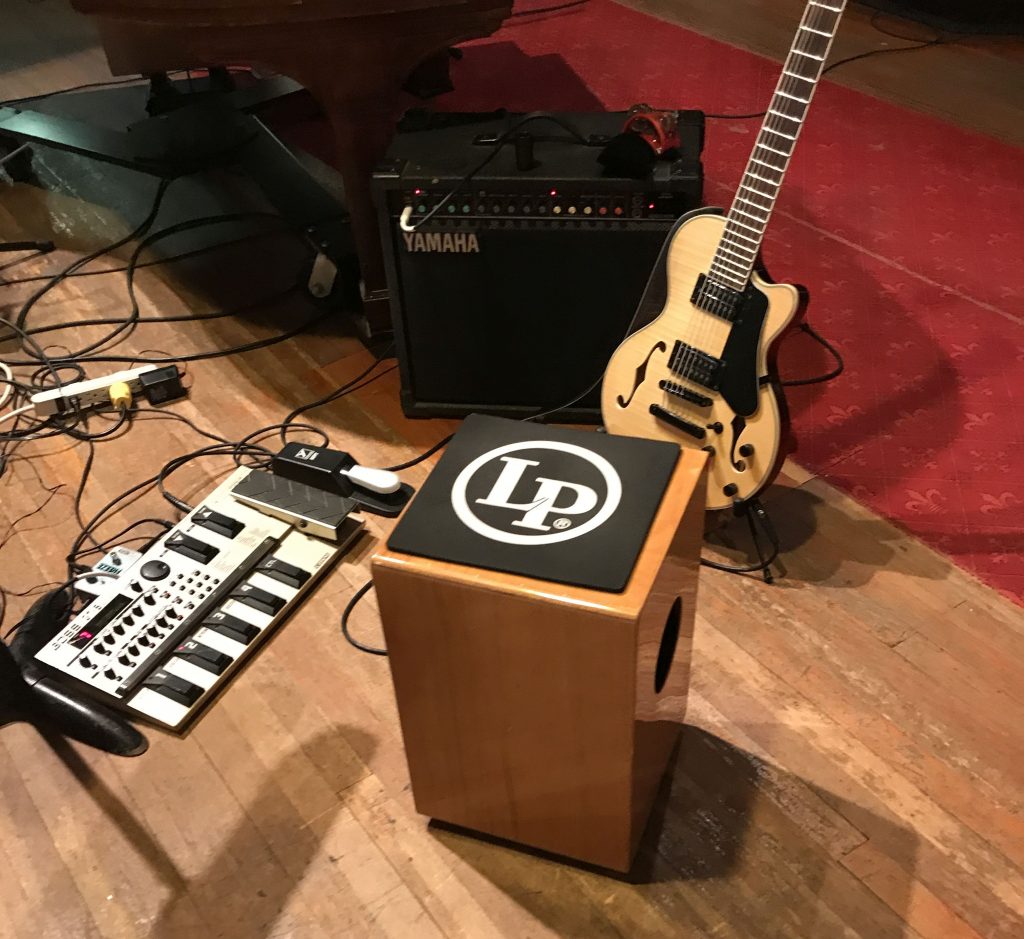 On the 28th I am doing a rare rock gig and even rarer drum gig. I am filling in for a cover band and it is not a great venue so I may not add a review of it