It is not too often that a ECM recording artist come to the ‘Peg let alone starts off their tour but this night had Jakob Bro in a trio format.

The show was okay. He’s a ‘tones’ guy and while that really works in the supportive rolls I have  heard him, as a solo artist, the 35th time he played with his effects nobs to get a sound got a little boring. This atmospheric stuff has its place in my life but a whole set wore pretty thin as I waited to hear a melody/theme/form, etc.

The real star was veteran Joey Baron! Kinda like lead drums. He led the band, set the tone, had tonnes of vocabulary and total dynamic control!

It was held at The Goodwill Social Club.

I hadn’t been there since it was Pop Soda’s. The stage, sound system is still nice, but they have the seating ass backwards. The high, pub style, seating is center and near the stage and the low seating is to the sides and back. I made the mistake of sitting in the deceptively comfortable looking but actually uncomfortable low seats and barely saw the stage all night. On top of that folks kept going to the front to take pictures and further block. 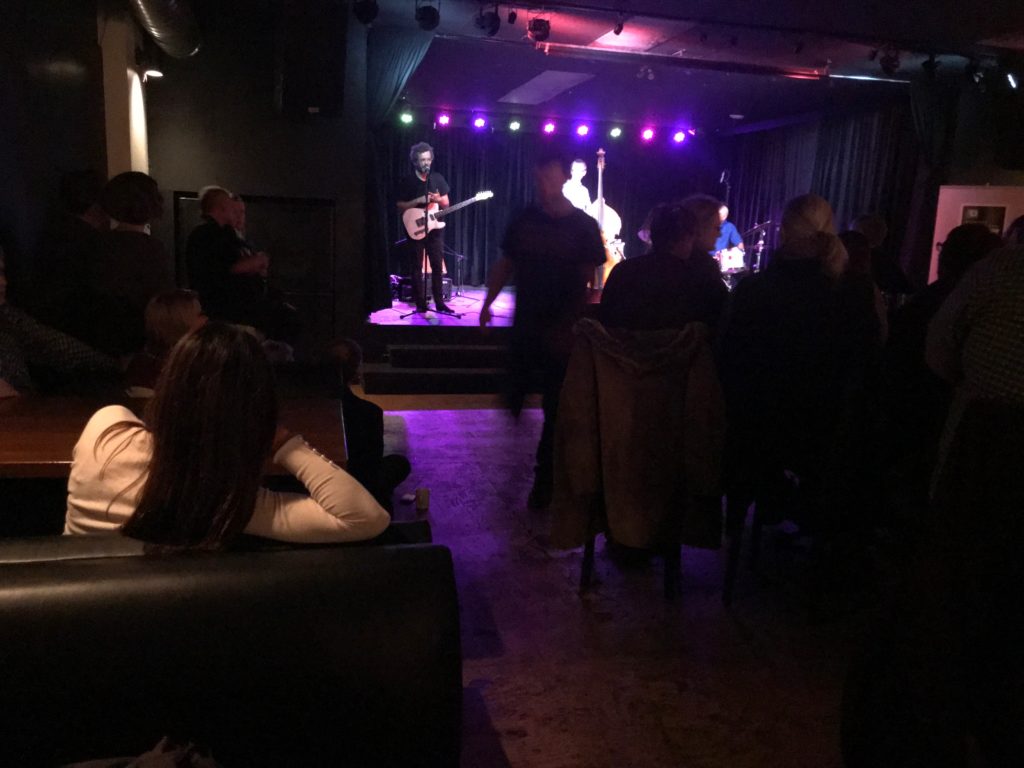 Was in appropriate and quite unprofessional.

Blinker Phase was your typical Winnipeg Millennial Music Clique throw together. They had done precisely 1 gig in their life and were actually admitting they were rehearsing upstairs before the show!

They were inappropriate because 2 chord pop vamps with loops, is not what belongs opening for an atmospheric avant-garde jazz trio.

What made them terrible was their lack of preparedness, basing their act on a Boss RC unit that they had obviously just rented or bought (pristine box on stage) and the over extending of 1 half of the duo.

The singer, Shenna Rattia is one of those U of M attendees. But unlike so many that are hyped up about, she is actually quite good. She was the star.

The Second half of the duo played a bit of drums, even less guitar and a smidgen of bass.

He talked over/interrupted the obvious front person, claimed to be a Luddite whilst use advanced tech, didn’t check the tuning of the guitar and even though he had headphones on to hear the drum loop, he still played out of time.

As part of the throw together/insecurity element they had a last minute addition of a keyboard player. It didn’t help.

That was a long 45 minutes!

But that is Nojazz Winnipeg for you. I have no idea why they feel the need to shoehorn in some local clowns into the international acts. Jakob could have played a longer set and started earlier (it was a Sunday night after all).
But then again the first time they had Jakob here it was opening for fake jazz, weird hat wearing R&B singer, Gregory Porter.