The Bodhran is a frame drum originating in Ireland early in the 20th century. Frame drums are found in almost all musical cultures but the Bodhran is common in Irish music and Celtic based music like that of Canada’s east coast. Instead of hands or traditional drum sticks we use one hand for balance, tone and volume control and a mallet like item called a tipper.

With bodhran lessons we teach you how to hold the drum, how to old the tipper, how to play in straight and compound time signatures, how to use the bodhran in other kinds of music. 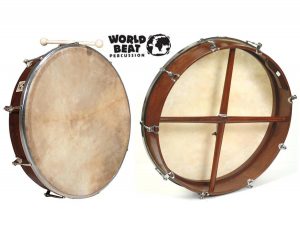