Usually at this time of year I write about our horrible excuse for a jazz festival. I have written about it before and it is basically the same thing. Jazz doesn’t sell so let’s have pandering commercial music to aid the jazz, have zero concept of marketing anything and then blame the jazz.  Since nothing has changed for the better and in some ways has changed for the bleaker, so it won’t take up the totality of this post.

Also I am sorry for leaving it this late. Between running my music school and a swath of gigs I have had little time.

I even considered passing on doing it as nothing has changed and these posts change nothing.

On With the No Jazz Show

And Remember: Anyone who questions the lack of jazz at a jazz festival is denounced as a jazz police purist.

There are fewer events and acts over all but the percentages remain the same sadly.

Only 35 of the 88 acts are jazz so we are in that 1/3 area again.
Only 3 out 8 main stage acts are jazz.
Only 2 out of 5 of the jazz labs are jazz.
The local acts of a jazz nature are, by and large, the same people rearranged and almost all are currently enrolled, drop outs or graduates of the local university’s fairly new program. So if you got your degree somewhere else or too long ago then don’t bother applying to perform. (Unless you have another inside track!)

So the blatant cronyism and complete lack of diversity that has marred previous festivals is doubly so this year.

The cronyism extends to the other areas of the fest with a board member, being a sponsor, doing work for the fest and getting free tickets to give to give away.

To be fair, cronyism is the major way of doing things in ‘the city that feels like a small town’. My first bunch of years here I thought it was just the music community that wouldn’t return the favour of a job with another job (the musician’s code where I am from). Gig after gig I gave to people in this town only to see the next gigs these people got go to their friends.

But I have lived here long enough to see, experience and hear about it extending to church communities, friendship circles, corporate ladders, construction sites, etc.

Marketing for the festival is still tonnes of wasteful printing, pointless posters on street poles covered up by other posters and useless Facebook invites.

Social media is the thing right??

Wow is that 13,000 people to market to? Probably not. Assuming that a good portion of the twitter twits are also Facebook junkies, that the majority of FB friends are musicians and/or out of province types then the number of legitimate customers that can be spammed is way less.

But if they knew squat about marketing they’d know you need to reach more that 9,000 virtual people and the lucky few who see their posters before they are covered up or torn down.

Particularly if they want to have a 11 day music festival that is supposed to make big money.

It is still longer than any other jazz festival in the world for a city this size.

It is still a part time job trying to justify being a full time job.

Last year they released their new schedule with the dates all wrong on the web version. This year ALL links  led to 404 errors! They fixed a lot of it but many links, supposed to go to artist and to band websites (the few that had them) generated the same result.

You all year to get this right…cripes.

Sadly, We Are Not Alone

The ‘inclusion’ of very popular music at jazz festivals is just a symptom of the larger war on jazz.

First off, the English speaking world is doing this to jazz festivals all over; with jazz focused festivals being the exception.

Cork Ireland gave us this quote about their diluted festival:
“The implicit corollary of this nonsense is that jazz does not ‘move with the times’. Nothing could be further from the truth. Hip-hop is a moribund, misogynist, vulgar imitation of its golden years; pop music is a cesspit of corporate promotion and recycled blandness; indie rock is a hypocritical, twee, middle-class, folkie parody of its former self. But jazz? Jazz is vibrant, ever-evolving music. In Europe, there is a genuine, continent-wide subculture of jazz that is far removed from the doldrums of mainstream popular culture. It is a music of educated, enthusiastic and open practitioners, treating the great heritage of jazz as one source of inspiration.”
from here

“As far as Jazz festivals go, the label “jazz” seems to include everything. Music from all disciplines and locales is fair game… Funk, Country, Balinese Gamelan, all World music. Oddly, sometimes jazz itself is given short shrift at jazz fests.
In addition to this, the mainstream of jazz music itself is excluded from all manner of music festivals with labels like Caribana, Folk, Blues, Classical and so on.”

So, ya,  jazz isn’t very popular. I came to terms with that from the beginning. Why can’t Jazz Festivals come to grips with it?

As a much younger person I relished liking music (jazz, latin, progressive rock) all my peers thought was old, moldy or a girl replant. I was proud to walk into a record store and scan the tiny section at the back of jazz records. I was more than ready to engage someone who thought jazz and blues were the same or that jazz came from blues.

There is some panache to liking an art form many don’t get, to owning a jazz station that only a niche listen to or a festival that caters to a music that has been evolving  since the early 1900’s, picking up the best of the popular culture along the way, honouring it’s past while adopting the future.

You’re just not going to get rich or popular doing it.

So jazz being a higher form of music and not popular qualifies it as an art form requiring not for profit status, sponsors and possibly government help.

So why the heck does our local shebang and many other festivals feel the need to get bigger, more popular and act like a for profit corporation?

The first time I heard live reggae, Soweto Pop or Soca was at a jazz festival .

Fast forward to today and we have almost all Canadian and many American jazz festivals marginalizing jazz, and loading their schedule with pop acts.

That’s why so many dates on an international jazz musicians calendar are Asian and European dates…they have jazz festivals with jazz only and they have a lot of them.

Trusted Jazz Labels are signing pop acts and jazz artists (usually vocalists) have a lot of downward pressure to do pop ‘re-imaginings’. Alongside that, female jazz artists are marketed in an increasingly sexist way…like it is the 60’s again.

Gregory Porter (who is at this year’s fest) won a jazz vocalist Grammy. WHAT? Did someone actually listen to the music? Or did they just look at the visuals (grand piano, upright bass small drum kit…must be jazz right??) Flugle horn solos over a 2 chord vamp doesn’t make it jazz.

So we get a jazz tinged soul/ R&B singer, with the manufactured and contrived affectation of always wearing a balaclava and a slightly askew English driving cap being passed off as a full on jazz musician with R&B/Soul Gospel influences. Sorry it is the other way around.

He has more in common with Bill Withers than he does with Bill Evans.

Good music but not jazz.

Maybe that is the sub-text. With so much bad music out there that anything slightly good has to have the jazz lantern hung on it to have a fighting chance

The only place we find that jazz is marketed as jazz is the satellite radio stations like Galaxie and Sirius  you pay for the service and they divide the music into genres and ONLY that genre is on that station.

Seems simple? They do get things wrong. They have blues listed as a jazz sub genre at Galaxie and sometimes they will put some less than stellar CANCON artist on the Jazz Masters channel. But hip hop on the jazz…jazz on the hip hop no, no they don’t.

With some irony…14 years ago Jazz Winnipeg would point at the more valid festivals’ 30% non jazz content and marketing focus to validate their own 30% jazz content. Well, sadly, the times have changed. Only Edmonton stands alone as a jazz festival with only jazz  in the schedule in Canada. Most of the small ones have gone the way of greedy capitalism and are focused on popular music while the big cities slice of jazz gets smaller and smaller.

I don’t know why anymore than I know why the NHL feels the need to change their basic rules in a failed attempt to get bubba to switch from monster trucks to hockey.

It’s like they are the insecure kid at school desperately trying to fit in rather than be themselves.

The corporate powers that be want to use the jazz ‘brand’ to give non jazz credibility. I have lost count how many hip hop and rap performer’s say they are jazz. How many boring pop artists, folkys, etc. use the jazz label/influence/look as a stepping stone?

So there you have it (or don’t) 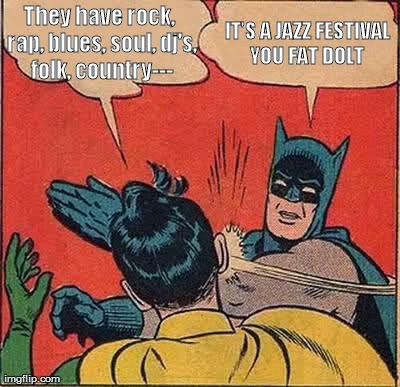