Just in case you don’t want to read the whole article:

Still has hardly any Jazz.

Still has hardly any International or out of town Jazz.

Still has a director who knows squat about jazz.

Still a part time job masquerading like a full-time job.

Every year I do a rant (or two) about how shitty the local nojazz festival is. Top to bottom it is a mess.

I was going to skip writing about it this year. I mean, all that happens is I get hate spam mail/comments, they steal my ideas for making the festival better…well all my ideas seem to be up for grabs except for one:

HAVE FUCKING JAZZ AT YOUR JAZZ FESTIVAL

How’s that for an idea? 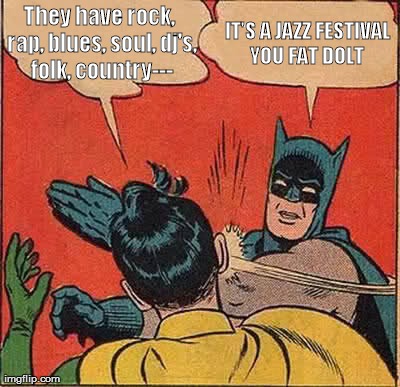 But ya, same ole same ole. Hardly any jazz, jazz from the same handful of locals recycled through a few thrown together groups under each other’s names, who also got gigs playing funk and folk.

Fuck, you’d think this town only had like 10 jazz musicians.

There were some things of note that got me back on the blogging about this.

Yes, after years of having a bean counter, pretending to have a clue about jazz, telling us this NFP was in the black,  the capo wielding folky, who wouldn’t know ‘Kinda Blue’ from ‘Deep Purple’ has no money to spend on music for his music festival. So, instead of having less acts over all, instead of having less less non- jazz acts, instead taking the out of province and international acts off the free stage and putting them in venues and charging money, he low-balled a bunch of the bigger (in members) local bands, approximately $11 per person, to appear.

They don’t pay much to start off with.

They don’t pay much, considering the hoops you have to go through to get a gig.

They don’t pay much, considering the stick handling you have to go through to get to the gig.

They don’t pay much.

But to then low ball and bully folks into taking chump change while still having to go all through that!

The corruptness of this, the mismanagement of this, the basic wrongness of a NFP music charity asking musicians to play for next to nothing and some worthless ‘exposure’.

What was also wrong is only some got asked to play for bus fare. Some (let’s say buddies/cronies/ex-band-mates/first past the post/suck-ups) were not approached this way.

Luckily Kevin Curtis (who I assume was someone who was offered an exposure gig) brought this to the attention of the Musicians Union and Jay Harrison took them to task.

Praise Yahweh! It’s a Festivus miracle! When pressured, they could magically find the money. Turns out the new director wasn’t just unqualified in the music sense, the math sense or the moral sense. Apparently he didn’t even know about the AFM‘s trust fund money. Since this was a trough the previous mis-managers fed at, it casts yet another shadow on the sudden leaving/removal of the bean counter. No legacy transition.

Now that we are on the topic of mismanaging…This is the 3rd time in 3 directors that they have left under odd conditions.

Failed punk rock bass player left amid ‘some funny business around the money’ (according to one board member).

Chris Fayer left after only one year at the helm to take a job with Folk Fest, more in line with his roots.

Bean counter “sure I can be the artistic director too even though I hate jazz” suddenly left in the middle of the year (as noted, didn’t even give the replacement a heads up on some basics) and the hastily picked, ‘doesn’t know Jack Teagarden from a  Jack Pine’ Mr Capo being shoehorned into the job, given a crash course on jazz “This is Miles Davis, he played the trumpet” and pressed into finishing the programming.

Like I said last year, this is less on the jazz hating directors they keep hiring and more on the Jazz Winnipeg Board who keep hiring folks based on the buddy system. Geez, two employees already in the system and two former directors of the WECC?

Wow, way to think outside the box!

Alright, on with the Programming
Off the top there were a few acts that deserved to be in a setting other than back to back with locals of various ability levels and musical appropriateness.

What is obvious here, is that they couldn’t (or wouldn’t) have club venues for these acts and sandwiched these international level groups among our locals.

Kinda Strange (AKA dumb). For years they put these types of acts in their ‘Club Series’ but then also put locals you could see for free in there too. Now the locals (in most cases) were put on the free stages, were they belong, but the international acts were there too.
I would have rather paid real money to see full sets from Ghost Note and Dan Weiss in a club rather than stick handling  around to the cube and listening to pop music waiting for the 1 band I wanted to see and only play for 30-45 minutes.

THE BIG OPENING WEEKEND OF THE JAZZ FESTIVAL

The Thursday, entitled “Dance Party” had a couple of funk bands with A local jazz group (made up of players you will see rerun through many of the ensembles) opened with an Argentinian jazz trio on second.

Friday was called “Horns Up” (I guess the idea that if it has horns it must be jazz) and the opener was Impressions, a jazz group made up (shockingly!) of only one of the members from the previous nights group. Then a Toronto pop singer, then a Quebec Jazz Trio then a funk band made up from members of the previous nights bands followed by 2 brass bands doing pop tunes.

Saturday and Sunday were called “Popland” and “Hip Hop and Soul”… self explanatory/no jazz.

Still in Market Square but called “The Stay-cation”. I guess this is their new marketing model. Cute names for the days and parts of the week. Sigh…get a clue.

Monday  also “Dance Party” (I guess they ran out of cute names pretty fast) but, like almost everything JW does, it is an EFF up. Call it Dance party at a jazz festival and have the first act be a slightly avant garde acoustic jazz quartet that you can’t dance to, followed by an African dance troupe where they do the dancing, followed by yet another brass band playing pop tunes and ending with a reggae band.

Tuesday was called  “Swing” and jazz is what they had. Of course the absurdity  of having one night out of  11 devoted, in name, to jazz is not obvious to jazz Winnipeg and their apologists.

Wednesday was called “In/Out” WTF does that even mean?

Pop band followed by another pop band But then…

an ethereal instrument pop and country tunes done in a Bill Frissell vibe. Followed by a local jazz band made up of folks who already have played gigs at the fest this week ending with an odd group of two horns and a drummer. Not jazz more like The White Stripes without a singer and a much better drummer.

Apparently Thursday is the first day of the “Closing Weekend”

Also called “In/Out”. When you look at this line up you can see one those typical JW marketing blunders. Instead of the ambiguous name they gave this night it could have been called “Modern Jazz” OR “Fusion Night”

Friday called “Latin Night”. After last year’s debacle of cancelling then hastily re inserting Latin night, it comes back this year but rather than the Thursday of the opening weekend put it in the Friday of the closing weekend. Mix of Latin jazz and Latin pop.

Saturday titled “Roots,  Blues and Dan”
So this was the worst bit of programming. A night of capos and slides with an avant garde soundscape jazz group stuffed in the middle.

So of The Cube’s 57 acts a grand total of 17 were jazz of a kind. I swear they must sit in a backroom somewhere with a calculator guaranteeing only 1/3 or less of the music be jazz. “Opps we have gone over 33% jazz content…better book some dj’s!”

The best bet for jazz this time round was the kitchen Sync series, all of it actual Jazz and only one by locals you can see anytime. But, at as much as $100 a ticket, it was out of reach to the average person. Now you could slip in for $15-$25 after the dinner portion, but I have no idea the quality of the seats. As well, that place is terrible to play music in and I assume it is hard to listen to music in.

Now the ‘main stage’ shows are a horse of a different colour.

Of the 19 acts 6 were Jazz. Again magically under the 1/3 jazz content mark.

100% of the 13 Goodwill acts were not jazz while 100% of the 6 pop up acts were jazz, but ALL of them were acts and players that already had one or more gigs at the fest.

The “Jazz for Lunch” was all jazz but typical for them, either all folks who were either local or from out of town and had other gigs you were supposed to pay for.

Not only are the Flaming Lips not appropriate for a jazz festival, they are inappropriate in our current climate. What with the sexual misconduct and cyber bulling allegations surrounding the band.

Get ready for A SHOCKER

Sooooo, of the 100 acts performing 33 of them were jazz. Could be anymore obvious the intent to have jazz be not just less than 1/2 but to be a distant minority!

Of note, since the departure of sexual predator and jazz bully, there is no longer a guaranteed jazz fest gig included in your Uof M jazz studies tuition.

While they still count on beer sales to make this work, they got rid of banning families with children away by turning the park into a booze can.

Also they had the gimmicky “Air Sax” competition. I am sure they were lined up around the corner to win a contest that had them looking like they were blowing themselves or sucking on an imaginary slug on their chest.

Let the troll comments begin! (no worries I won’t post them unless it is a real name backed with a real profile so don’t waste your 2 finger typing skills)